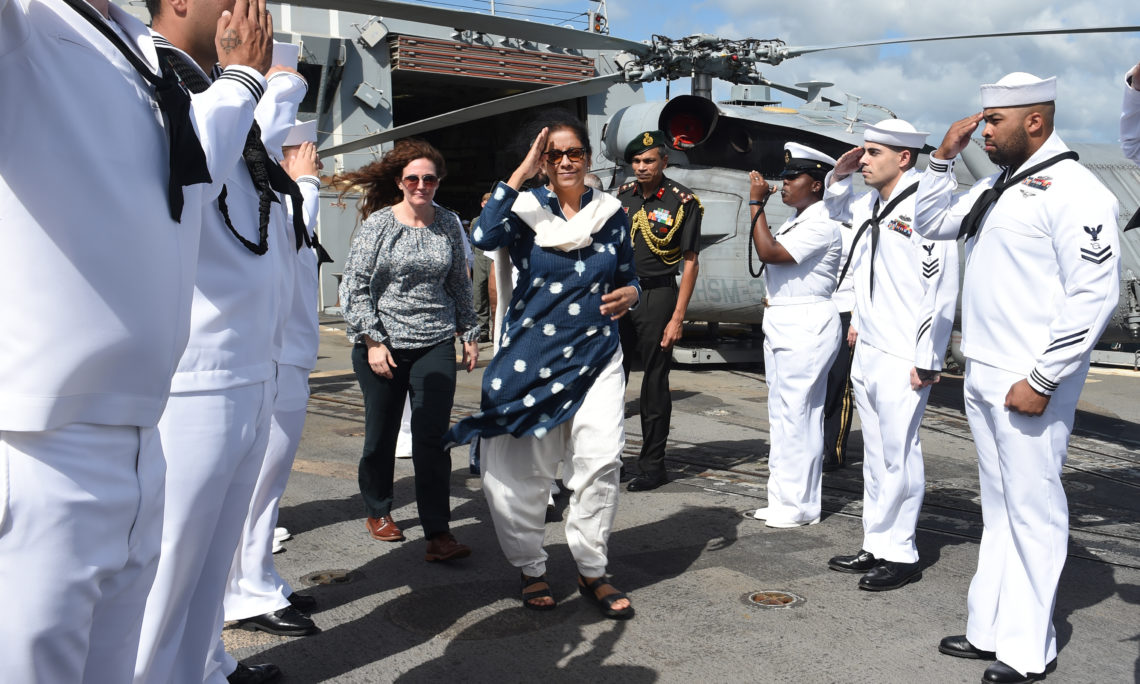 181206-N-QB805 PEARL HARBOR (Dec. 6, 2018) India's Minister of Defense, Nirmala Sitharaman is piped ashore after touring the USS Michael Murphy. India and the U.S. are global partners in defense and security and are working together to assure a free and open Indo-Pacific.(U.S. Navy photo by Mass Com

“I was extremely pleased to host the Honorable Minister of Defense, Nirmala Sitharaman here in Hawaii,” said Davidson. “Our two democratic nations are committed to upholding a rules-based international order, which has brought decades of peace, stability, and prosperity. We are global partners on defense and security and this exemplifies our mutual cooperation to assure a Free and Open Indo-Pacific.”

After her meeting with Davidson, Sitharaman was given a tour of the USS Michael Murphy (DDG 112) and an afternoon barge tour of historic Pearl Harbor also hosted by Adm. Davidson.

The United States and India have been major defense partners since 2016, a partnership that was reinforced by the inaugural U.S.-India 2+2 Ministerial Dialogue in New Delhi this past September, which included the signing of the Communications Compatibility and Security Agreement. This partnership is a reflection of the increasing strategic importance of the U.S.-India security relationship and the significant progress both countries have made in advancing their defense cooperation. The opportunities for mutual coordination and collaboration in the Indo-Pacific region continue to grow.

Air forces of India and the US are currently conducting a 12-day military exercise in Kalaikunda and Panagarh air bases in West Bengal, with an aim to enhance operational coordination, according to India Air Forces officials. The ‘Ex Cope India-18’ will be the fourth edition in the series of bilateral drills between the Indian Air Force and the US Air Force.

USINDOPACOM protects and defends, in concert with other U.S. Government agencies, the territory of the United States, its people, and its interests. With allies and partners, USINDOPACOM is committed to enhancing stability in the Indo-Pacific region by promoting security cooperation, encouraging peaceful development, responding to contingencies, deterring aggression, and, when necessary, fighting to win. This approach is based on partnership, presence, and military readiness.