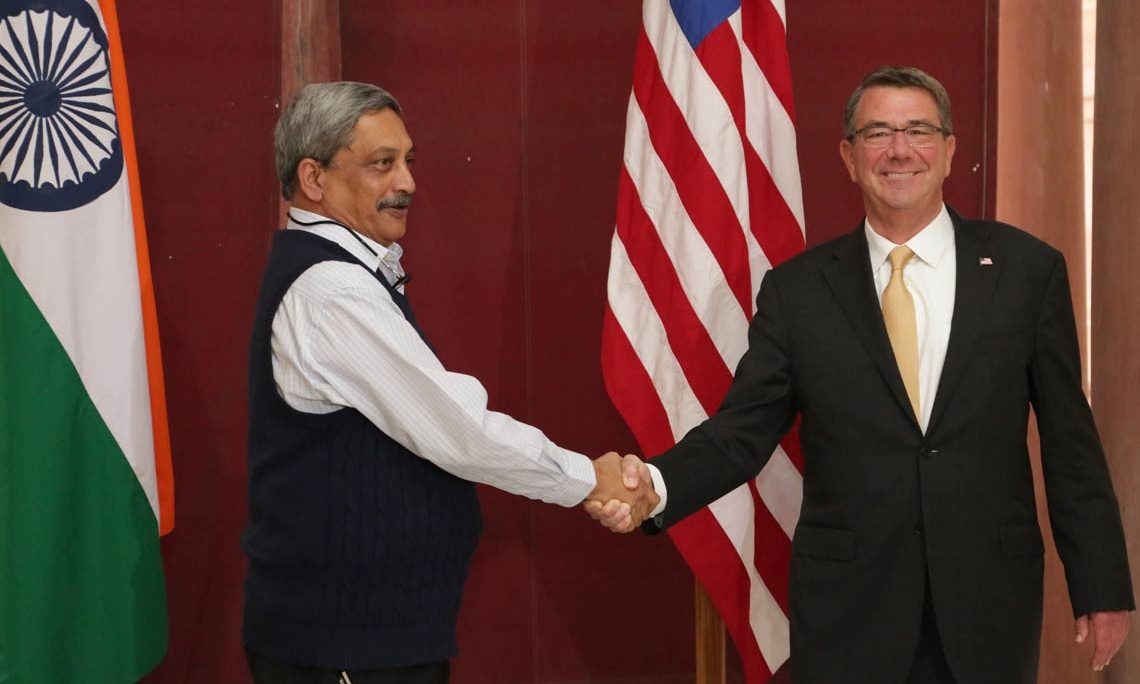 U.S. Secretary of Defense Ash Carter made an official visit to India at the invitation of Raksha Mantri Shri Manohar Parrikar today, marking the seventh interaction between the two leaders.  Raksha Mantri Parrikar and Secretary Carter reviewed the tremendous progress made in bilateral defense ties and discussed the immense promise for the future of India-U.S. security cooperation.

Both sides exchanged views on regional security issues including the threat posed by terrorism. They agreed to continue further strengthening the bilateral counter-terrorism cooperation and underlined the need to ensure that terror groups receive no patronage from any State.

Citing common values and our shared desire for peace and prosperity in the Asia Pacific and Indian Ocean region, the two leaders reflected on the convergence of interests that have driven the strategic and technological “handshakes” between our nations, and led to historic progress in our bilateral relationship.

India-U.S. defense relations in recent years have moved along a remarkable upward trajectory.  Marked progress on agreements, including the signing of a Defense Framework Agreement in 2015, have laid a blueprint for collaboration between our defense establishments and enabled deeper cooperation.  Joint exchange opportunities – in both personnel and training exercises – have expanded and strengthened our bilateral cooperation. The recent signing of the Logistics Exchange Memorandum of Agreement (LEMOA) has facilitated additional opportunities for practical engagement and exchange.

Today we finalized India’s designation as a “Major Defense Partner” of the United States.  The designation as a “Major Defense Partner” is a status unique to India and institutionalizes the progress made to facilitate defense trade and technology sharing with India to a level at par with that of the United States’ closest allies and partners, and ensures enduring cooperation into the future.

With regard to technology, both sides welcomed the tremendous progress achieved under the Defense Technology and Trade Initiative (DTTI) and committed to explore new proposals and other innovative opportunities forco-production and co-development.  The emergence of DTTI as an integral and enduring component of India-U.S. security cooperation is a sign that the relationship has matured to a level of strategic importance.  DTTI will strengthen India’s “Make in India” initiative and both sides committed to convening all new DTTI working groups prior to the next DTTI Group meeting anticipated for February 2017.

Raksha Mantri Parrikar and Secretary Carter agreed that the strong partnership between our countries is lasting and will thrive and grow for decades to come.