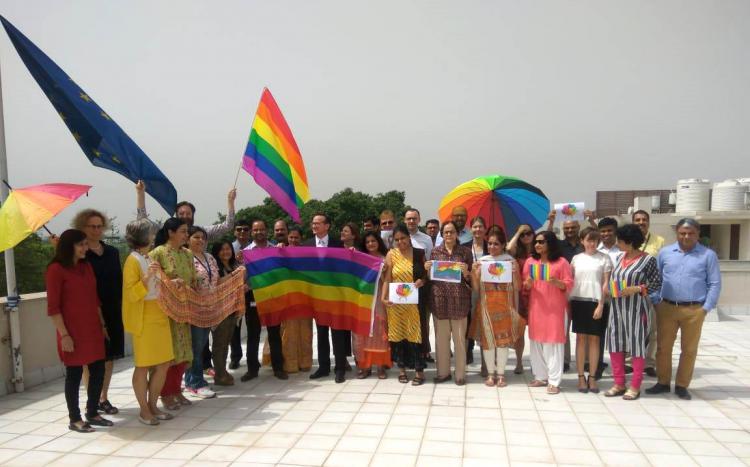 On the occasion of the International Day Against Homophobia, biphobia and Transphobia (IDAHOT day), we the undersigned diplomatic missions in India’s capital, reaffirm our countries’ strong commitment to promoting the universality of human rights and to ensuring that everyone, regardless of their gender identity or sexual orientation, enjoys these rights without discrimination.

Every year around May or June, our governments and our civil society work together to support, organize, or participate in a wide range of events to celebrate the diversity of our citizens, to reduce discrimination and misinformation about the LGBTI community, to build on individual and collective achievements, and to highlight what needs to be done to ensure human dignity and equality for all human beings. Events are as diverse as the countries and communities that host them, but usually concentrate around IDAHOT day on May 17, LGBTI Pride marches and events in June, and sometimes at other moments of the year such as on Human Rights Day on December 10.

This year, events organized by foreign missions in New Delhi around IDAHOT day include the lighting of embassies in the iconic colours of the LGBTI rainbow flag, hoisting the rainbow flag on the embassies’ flagpoles, LGBTI film screenings, lectures, as well social media campaigns using the hashtags #MyCountry4Equality and #IDAHOT2018.

These diverse celebrations raise awareness about this important issue and foster a sense of community and belonging to advance human rights for all throughout the world. When all persons are protected on the basis of equality and with dignity, global stability is enhanced. We note with pride the increasing progress being made around the world to protect the fundamental human rights of LGBTI individuals and have included  a list of national and international achievements in the annex.

We also take this occasion to express our solidarity with the human rights defenders and civil society organizations working around the world to uphold the fundamental freedoms of LGBTI persons to live freely and with dignity.

In 1791, France becomes the first West European country to decriminalize homosexual acts between consenting adults, followed by the Netherlands in 1811, Brazil in 1830, Portugal in 1852, the Ottoman Empire in 1858, Guatemala and Mexico in 1867, Japan in 1880 and more than a hundred countries in the 20th century.

In 1867, Karl Heinrich Ulrichs becomes the first self-proclaimed homosexual to speak out publicly for homosexual rights when he pleads at the Congress of German Jurists in Munich for a resolution urging the repeal of anti-homosexual laws

Literature, and later theater and cinema, gradually increase visibility of the LGBTI community and its acceptance: in 1895, at the same time Oscar Wilde is sentenced to two years hard labor in prison for “gross indecency,” the novel “Bom-Crioulo” is published in Brazil with homosexuality at its center and with a black man as the story’s hero. In 1913, Marcel Proust publishes “In Search of Lost Time” in France marking the first time a modern Western author writes about homosexuality. In 1919, “Different From the Others,” a German-made film, is one of the first explicitly gay films. Throughout the 20th century, and increasingly around the world, numerous intellectuals and cultural figures come out as LGBTI.

After the Second World War, the rate of countries decriminalizing homosexual acts between consenting adults grows, organizations defending LBGTI rights are created, and publications on the subject grow.

In 1970, the first Pride march is organized in the U.S., later followed in different forms by many countries on all continents. In 1972 “Parents, Families and Friends of Lesbians and Gays” is founded in the U.S., becoming one of the first large-scale organizations of straight people defending LBGTI rights.

Gradually through the 1970s, homosexuality stops being considered an illness, and in 1981, is removed from the national classification of diseased in Finland, which culminates in 1990 with a formal decision of the World Health Organization.

Starting in the 1990s, openly gay/lesbian candidates win elections in local assemblies, parliaments, city halls, and in some cases reach the head of State and Government. The United Kingdom has the highest number of openly gay, lesbian and bisexual parliamentarians in the world, with more than 30 Members of Parliament from across the political spectrum.

In 1994, Israel legislated a constitutional law prohibiting discrimination on the basis of sexual orientation. The law’s constitutional status automatically applied the prohibition to all governmental and religious bodies in Israel, and was later expanded to include the public sector including private businesses. The Israeli coastal city of Tel Aviv is booming as the travel destination for the LGBT community in the region.

In June 2000, former president of the United States, Bill Clinton, issues the first ever Proclamation marking Gay and Lesbian Pride Month stating; “This June, recognizing the joys and sorrows that the gay and lesbian movement has witnessed and the work that remains to be done, we observe Gay and Lesbian Pride Month and celebrate the progress we have made in creating a society more inclusive and accepting of gays and lesbians.”

In 2000, the Netherlands becomes the first country to legalize same-sex marriage, marking a shift in tide for the recognition of equal rights of LGBTI people around the world. In recent years on the 17th of May, The Netherlands Embassy has organized events in New Delhi on LGBTI issues with the community. The Netherlands and Uruguay, organized an international LGBTI conference in Montevideo on 13-15 July 2016 where more than 200 countries and organisations participated. During this conference, the Equal Rights Coalition (ERC) was established with 33 members, with the Netherlands and Uruguay as the first co-chairs.  The ERC is the first ever inter-governmental body focused explicitly on advancing LGBTI human rights and inclusive development.

Canada performs the first legally recognized same-sex marriage in 2001, before the government became the first country in the Americas to legalize it nationwide in 2005, the same year in which Spain legalizes same-sex marriage. Belgium legalized it in 2003, and granted same-sex couples the right to adoption in 2006. South Africa follows suit in 2006 and becomes the first African country to extend full marriage rights. Argentina, in 2010, becomes the first Latin American country to approve same sex marriage, and in 2012, becomes a pioneer worldwide in passing a gender identity law. Brazil, besides being an important sponsor of initiatives for LGBTI rights in the United Nations, legalizes same-sex civil unions and marriages in 2011. In 2013, Australia introduces new legal protections against discrimination on the basis of sexual orientation, gender identity, and intersex status. This legal reform was recognized as world-leading as Australia was one of the first countries globally to specifically protect intersex persons from discrimination.

Third gender rights have been led mostly by Asia. In 2007, Nepal is believed to have become the world’s first country to include a third gender option on its census forms. India has long recognized a community of five to six million third gender Indians as citizens who do not identify themselves as either male or female. In India in 2009, the nation’s election authorities decided to formally allow an independent designation for intersex or transgender voters and in April 2014 the Indian Supreme Court issued a landmark judgment granting transgender people legal recognition and access to “all rights under the law”. In 2009 the chief justice of Pakistan ordered the National Database and Registration Authority to issue national identity cards with a third gender category for non-binary citizens. In November 2013 the Bangladesh Government announced the recognition of the third gender category in all national documents and passports. In June 2017, the Government of Canada passed legislation that protects transgender and other gender-diverse persons against discrimination, hate crimes and hate propaganda by adding gender identity or expression to existing lists of protected grounds in the Canadian Human Rights Act and the Criminal Code.

Today, an increasing number of Heads of States and Government in the world, as well as numerous politicians or personalities, do not hide that they are members of the LGBTI community.

#PrideMonth: Diplomatic missions in New Delhi reaffirm their strong commitment to promoting the universality of human rights. #DYK the U.S. Embassy in Delhi is lit up for pride during the month of June. https://t.co/bRXNFyA2s9 #MyCountry4Equality pic.twitter.com/2P4ZPLSJhu