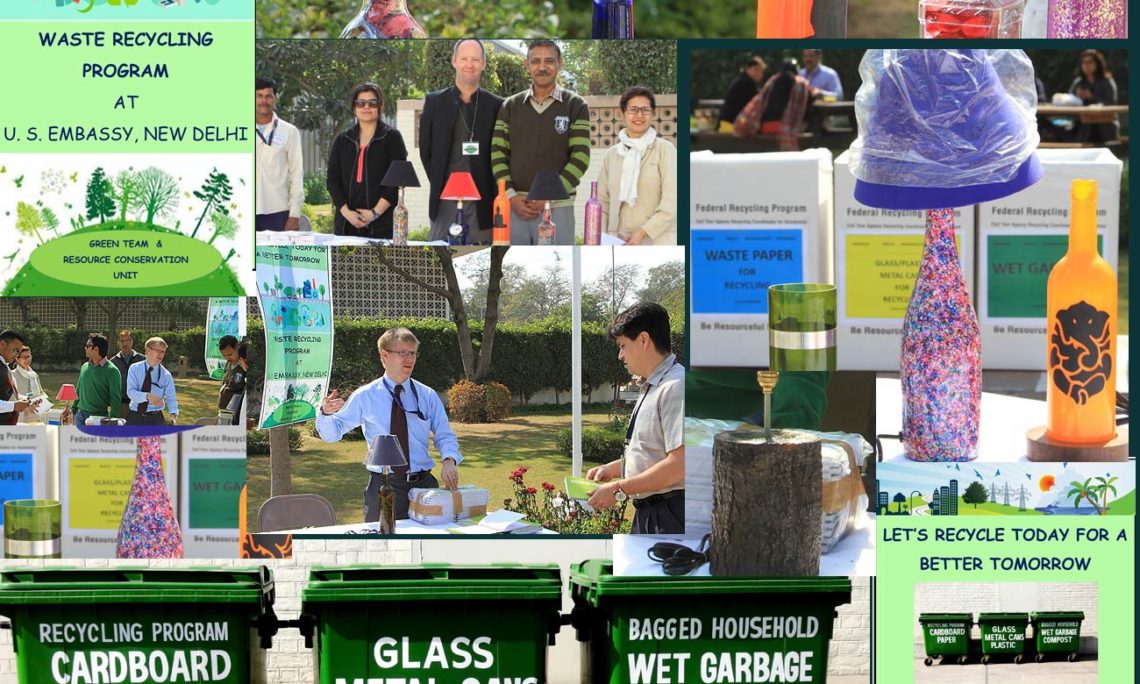 The U.S. Mission to India is proud to do its part in serving as a responsible steward of the environment.  The United States is committed to working with India and all of its other partners around the globe on preserving natural resources and leaving a cleaner world for future generations.  Embassy New Delhi and Consulates General Mumbai, Chennai, Hyderabad and Kolkata all strive to be responsible members of their host communities by finding innovative ways of managing waste and promoting efficient use of resources.  Below are some of the Greening initiatives that the U.S. Mission to India is currently undertaking on its facilities throughout India.

Kolkata has installed solar water heaters on the roofs of the Consul General and other officers’ residences in order to reduce electrical energy consumption.

Consulate General Kolkata has installed energy efficient insulate windows in office buildings and some apartments to reduce the need for air conditioning and, therefore, energy consumption.

Consulate General Kolkata has implemented a waste water recycling system to reuse water for gardening and to wash Consulate vehicles. Previously, all backwash water from the Consulate’s water treatment plants used to discharge into the main drainage system, resulting in the loss of about 6 kiloliters of water per day. By initiating this project, the Consulate has reduced water consumption by 45% and reduced the load on Kolkata’s city drainage system.

Consulate General Hyderabad enacted an energy saving project through which it replaced about 100 incandescent light bulbs with LED bulbs. The Consulate has already noted a 6% reduction in overall energy usage.

In April 2015, Consulate General Hyderabad celebrated Earth Day by planting trees on the Consulate grounds. The Greater Hyderabad Municipal Corporation (GHMC) donated 150 tree saplings for the event and the Consulate handed out saplings to all Consulate employees. The objective was to make Hyderabad greener and to freshen the air.

Consulate General Hyderabad manages the “Regional Water Testing Initiative: Engaging Citizen Scientists program.” This project aims to engage and empower youth as “citizen scientists” who will make scientific measurements of water health which can be analyzed with easy-to-use testing kits that look at a variety of indicators. The project helps students and others better understand and appreciate this precious resource.

Consulate General Chennai is reducing its water use by planting native and other draught resistant plants on the majority of its garden space. Plants accustomed to the wet and dry cycles of South Indian weather require less water usage by Embassy gardening staff. Use of native plants also helps protect the integrity of local ecosystems.

Consulate General Chennai has mainly focused on improving energy efficiency by greening its facilities through structural and equipment upgrades. These upgrades include the installation of solar water heaters, LED lighting, more efficient air conditioning units, and a new and efficient Consulate chiller. While these efforts have reduced energy usage by 16% over the last 8 years, more can be done! As the Consulate continues to adopt energy efficiency strategies, focus is also turning to raising awareness and fostering behavioral change in energy consumption. Current efforts include improving community outreach about energy usage and promoting simple strategies to reduce energy consumption.

Water and Energy resources are inexorably linked. Mumbai found that it had a high water-energy ratio in its water treatment/distribution and discharge of wastewater processes. The Consulate General installed a new irrigation line to reduce the workload on the water treatment plant. This modification reduces the energy consumed through water management.

“Turn off the Lights” is the rallying cry of Mumbai’s new public awareness initiative to promote energy conservation. The RCU created “Turn Off the Lights When Not in Use” placards which have been posted next to light switches in common rooms/areas around campus. Automatic motion sensor switches have also been installed in all areas as part of this effort. By promoting the “Green” savings from these efforts, Post has seen an improved awareness in our community and increased use of natural lighting in common areas.

As part of its efforts to contain high energy costs and further reduce its dependency on city supplied power, Consulate General Mumbai has prioritized its focus on renewable energy resources. The Consulate’s Resource Conservation Unit completed a feasibility study to measure the viability of wind-operated fans in utility buildings. The initial findings supported the initiation of a test-bed, which started with the installation of 10 wind-operated fans in a single building. The project was completed in July 2015 and has been a huge success. The required airflow was achieved and the Consulate is expanding this successful platform to other utility buildings. This project has further reduced total energy consumption, advancing the dual goal of exploiting renewable energy (GREEN) resources and achieving energy cost containment objectives.

After a comprehensive study, Consulate General Mumbai initiated a pilot project in its warehouse and office buildings to replace fluorescent lamps with more energy efficient LED lamps. During the first phase of the project, the Consulate replaced 400 CFL lighting units with LEDs. At the completion of the project, Mumbai has realized a reduction in its total energy consumption for these facilities. This represents a yearly dollar savings of approximately $10,500. With the successful completion of the pilot and positive cost and energy savings, Mumbai has initiated the second phase of the project in 2015. This phase will see an additional 400 LED units installed across the Consulate’s facilities.

Embassy New Delhi has made great progress in developing its Air Quality Improvement Program. The Embassy uses Air Door Blower Kits to identify where air is getting into offices and residences and uses a variety of tools to seal offices and homes as much as possible.

Embassy New Delhi is able to promote better resource conservation by using meters to monitor electrical usage. Meternet and E-gauge have been installed in office buildings and residences, which is a step towards being able to better understand how energy is being used, how best to promote energy awareness and where improvements can be made. Meters are also being installed at every Consulate.

Embassy New Delhi protects and conserves water through a monitoring program that tracks water consumption by installing meters at various locations. This simple approach helps us understand our water use and identify waste. The thumb rule is “That what cannot be measured, cannot be managed.” Proper metering allows Embassy management to monitor the impact of conservation measures and prioritize funding for water conservation initiatives. The Embassy has installed meters on all water supply sources and associated buildings and systems such as cooling towers, irrigation systems and air conditioning water lines. Metering allows the monitoring of monthly usage and identification of spikes in consumption. This has helped the Embassy to reduce its water usage by 30% over the past two years. We also use underground leak detection instruments to identify leaks and fix them promptly.

Embassy New Delhi began its Paper Recycling program in 2013 with a very small quantity of plain paper and newspaper. Since then, Paper Recycling has developed into a sustainable program that now includes plain paper, newspaper, magazines and, as of recently, cardboard that was previously thrown out as normal waste. Today the Embassy collects nearly 24,000 kg of waste paper for recycling each year. This is equivalent to 240 trees annually. The waste paper is collected in paper recycling bins ear-marked for the purpose and strategically placed at various locations to maximize collection. The Embassy is even able to save money by recycling as a portion of the scrap paper it collects and distributes to a partner is returned free of cost as printer grade white paper.