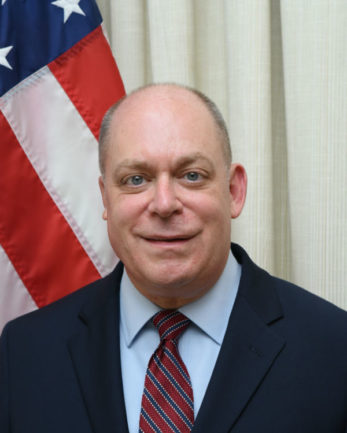 Consul General Joel Reifman assumed the post of U.S. Consul General in Hyderabad on August 20, 2019.  Prior to this assignment in Hyderabad, India, Mr Reifman served as Deputy Chief of Mission at the U.S. Embassy in Dhaka, Bangladesh.  He has served at the State Department in Washington D.C. in the Bureau of Intelligence and Research and as Deputy Director of the Office of Aviation Negotiations in the Bureau of Economic and Business Affairs.  Mr. Reifman was also a Pearson Fellow in the Office of Senator Joseph Lieberman.  Mr. Reifman’s prior overseas assignments include Senior Deputy Coordinating Director for Development and Economic Affairs at the U.S. Embassy in Kabul, Afghanistan, Charge d’ Affaires at the U.S. Embassy in Asmara, Eritrea, Provincial Reconstruction Team Leader in Iraq’s western Anbar province, and Economic Counselor at both the U.S. Embassy in Panama and the U.S. Embassy in Islamabad.  Before joining the State Department, Mr. Reifman served as an Assistant Staff Judge Advocate in the U.S. Air Force.  He earned his Bachelor of Arts degree in English literature from the University of Michigan and a Juris Doctorate from Southern Methodist University.