America’s relationship with South India has a long history tracing back to 1792, when U.S. President George Washington appointed Massachusetts businessman Benjamin Joy as the first American Consul to India. According to “William Abbott: Consular Agent at the Beginning” by S. Muthiah, British rulers refused to recognize Joy’s commission, but he was allowed to stay in Calcutta and serve as the U.S. government’s commercial agent.

From Calcutta, however, Joy found it difficult to manage U.S. maritime interests in Madras.  And so, on November 24, 1794, he appointed American merchant William Abbott as the first U.S. Consular Agent of the Madras presidency. Abbott served in this role for more than a decade.

After a hiatus of several decades, trade between India and the United States took on a more important role and a separate U.S. consular agency was finally established in Madras in May 1867.  At this time, Joseph L. Thompson was appointed Consular Agent to Madras.  The main role of the Consular Agents during those times was to promote trade and American business interests, and most consular agents between 1867 until 1908 were selected from the ranks of expatriate businessmen.

This standard changed with the “Reorganization Act of April 5, 1906,” which regularized consular service with fixed tenures of office, fixed salaries, a system of promotion, and seven position classes including consuls general and consuls.  On December 1908, acting on a recommendation by the U.S. Department of State, Nathaniel B. Stewart assumed his duties as the first representative of the American government graced with the title of Consul in Madras. 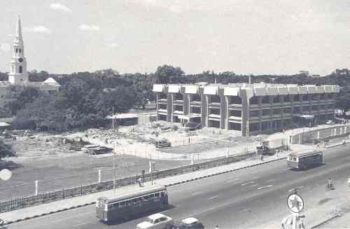 The Consulate Building in 1969

With the official level of the office as a Consulate, an office was set up on the third floor of a building owned by Parrys & Co., on No.1 China Bazar Road, now called Netaji Subash Chandra Bose Road. Once again, the office moved to a building between Rajaji Salai (formerly known as Beach Road) and Moore Street, which was later torn down to give way for a modern six story building, now known as Dare House. In 1940, the U.S. Consulate occupied the fourth floor of Dare House.

However, it was not until India gained Independence on 15 August 1947, that the American diplomatic post in Madras officially became a Consulate General. This is an event of great significance for it marks the beginning of a tremendous growth in Indo-American bilateral relationship. Roy E.B. Bower became the first Consul General in Chennai under the independent flag of India.