Actress Mona Ambegaonkar gave a tour de force one-woman performance in the gay-themed play Ek Madhav Baug on June 30 at the Dosti House American Space. The moving matinee performance drew an audience of dozens of activists, students, and the general public. Written in 1998, Ek Madhav Baug is one young man’s coming out to his mother when he gives her his personal diary to read and through which she learns of his struggles and joys coming to terms with being a gay man in India. The play is emotionally charged, and this energy fed a lengthy and lively discussion afterwards on the topics of LGBTI rights in India. PAS Mumbai CAO and a representative from program partner Humsafar Trust—one of India’s leading LBGTI rights organizations—led the audience interaction. 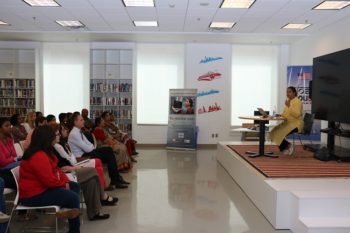