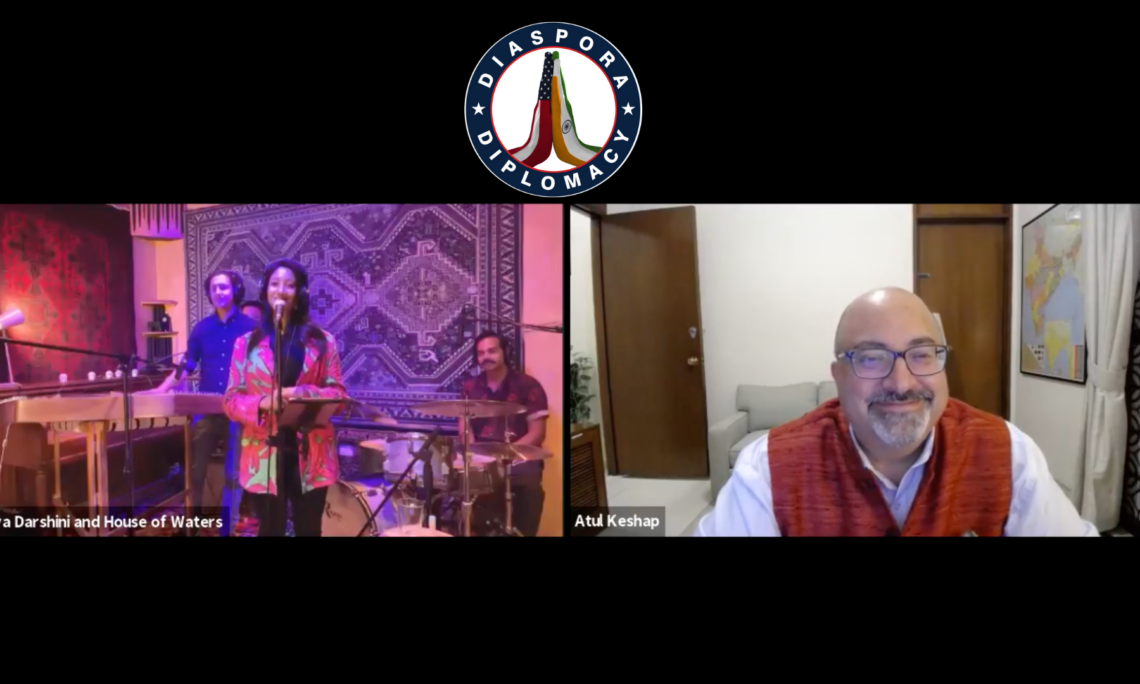 The virtual concert, supported by U.S. Department of State’s Arts Envoys Program, was live-streamed on the U.S. Consulate General Chennai’s Facebook page.  Priya Darshini has roots in Indian classical music and her debut album Periphery was nominated for a Grammy Award for Best New Age Album.  On August 19, Priya and the House of Waters band, comprised of hammered dulcimer artist Max ZT, bass guitarist Moto Fukushima, and drummer Sunny Jain, will host a free virtual workshop for emerging musicians.  To participate, please register through this link.  The concert, organized in partnership with Bengaluru-based Indian Music Experience Museum, will be live-streamed on their Facebook.

The #DiasporaDiplomacy series presents prominent Indian Americans discussing their journeys and their role in deepening bonds between the United States and India.  The series also highlights the extraordinary contributions of the Indian American community to the U.S. business, academic, innovation, health, and science sectors.

Priya Darshini said: “I’m deeply honored to be a part of #DiasporaDiplomacy and to be a part of the diverse Indian immigrant community here in America.  Having lived in a primarily Maharashtrian and Gujarati neighborhood in a multicultural Mumbai and raised in a modest South-Indian Tamil household, I always felt that I was on the periphery of all these cultures.  Moving to America and living in New York City amplified that in fascinating new ways.  The periphery offers unique and important perspectives that produce questions of centrality and has been the impetus for so much of my critical thought and my music.  It brings me great joy to be able to offer my music as a language to process what so many of us feel.”

Sundar Pichai.  Sunita Williams.  Vivek Murthy.  From winning the spelling bee, to running some of our biggest companies, to having a voice at the table in the federal government, Indian Americans disproportionately contribute to America’s story.  What is the secret of their success?  Through a series of conversations, #DiasporaDiplomacy will inform, acknowledge, and celebrate the identity, achievements, and assimilation of the Indian American diaspora in America’s multicultural fabric.  Indian American achievers from different walks of life will feature as guest speakers to talk about their journeys highlighting America’s opportunities through personal and collective prisms.  Join U.S. Mission India as we highlight the extraordinary contributions of the Indian American community in business, academia, politics space, the arts, and civil society.

2021 Grammy-nominated Priya Darshini has her roots in Indian classical music, but her knowledge of global music has resulted in a fresh, imaginative, and fascinating new sound.  She presents an exciting combination of range, technique, unconventional compositions, a feminist perspective, and a unique prodigious voice.  An actress, activist, and musician, Priya has collaborated with a wide range of artists from all over the world including several Grammy Award winners.  Her debut album Periphery was nominated for a Grammy Award for Best New Age Album.

House of Waters has scored an Emmy-winning documentary for ESPN and has shared the stage with some of the most influential musicians of the century including Pandit Ravi Shankar, Victor Wooten, Tinariwen, Snarky Puppy, and Karsh Kale.