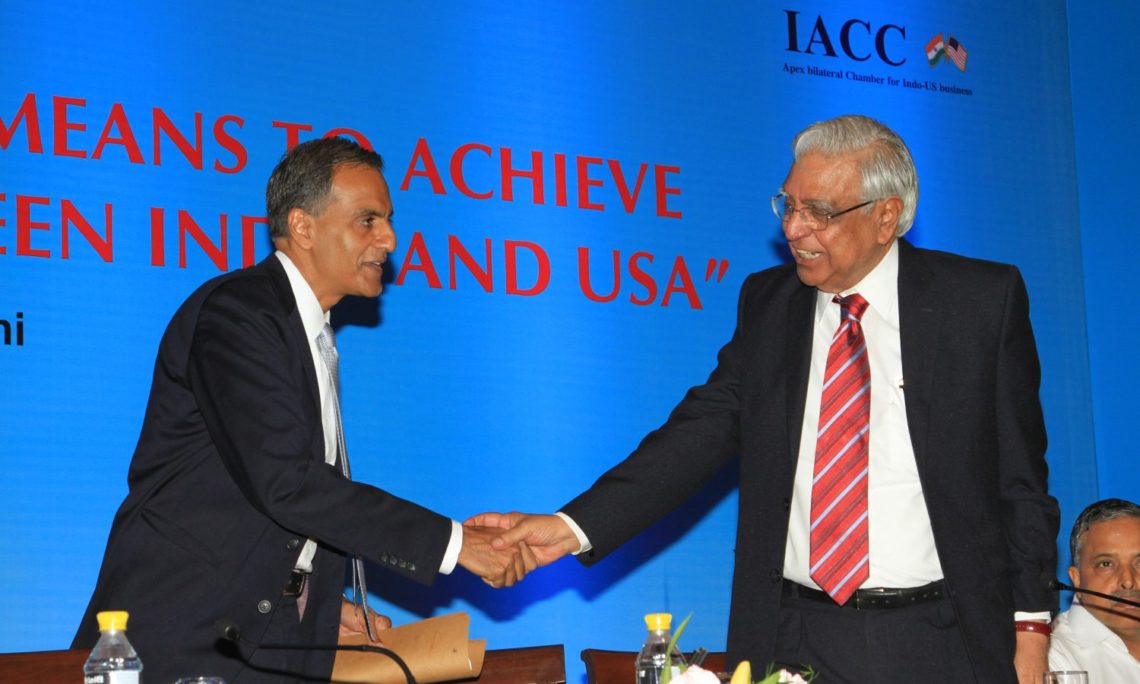 Thank you Mr. Advani for that kind introduction.  I really appreciate IACC for taking the initiative to organize this great event.  IACC has long recognized the importance of travel and tourism between the U.S. and India, not only as an economic engine, but as a key facilitator of people-to-people ties.  I also want to thank the extraordinary lineup of speakers today, including Additional Secretary UP Singh, Mr. Amitabh Kant, CEO of NITI Aayog, Isabel Hill from the U.S. National Travel and Tourism Office, and the representatives from leading airlines.  I’m thrilled to be here with you all today.

Before I begin, let me take a moment to discuss the horrendous events that took place in Istanbul last night.  The United States condemns in the strongest terms the attack on Ataturk International Airport.  Our heartfelt condolences go out to the victims and their loved ones and we wish a swift recovery to those injured.  As the White House stated, airports are a symbol of the international connections and ties that bind us together.  I think that’s exactly right.  The global bonds between our citizens are more powerful than the gun or bomb of any terrorist and we will continue to work with our partners, including India, to confront and defeat this challenge.

When I received the invitation from IACC to speak at this event, I enthusiastically accepted because I believe one of the core priorities of every Ambassador should be the deepening of people-to-people ties through tourism and travel.  And that holds especially true for the United States Ambassador to India.  For centuries, India has been a destination for American explorers, traders, and intellectuals.  In the early 19th century, American sea captains transported ice from New England over 16,000 miles to Kolkata.  This makes one have a deeper appreciation for automatic icemakers!  Mark Twain marveled at India’s culture and history during his travels to Varanasi, Mumbai, and Kolkata.  And in 1879, Ulysses S. Grant became the first American President to visit India; he came as a tourist after he left office.  Perhaps President Obama will consider another visit after he leaves office!

My time as Ambassador here has been in part, a journey of self-discovery.  Last year, I had the privilege to visit Punjab and see the hometown of my mother and grandmother.  I went to the village where my father grew up.  In Mysore, I visited the family of my brother in law.  And in between seeing all the cousins, aunties, and uncles – there are a lot of them! – I’ve travelled across 20 states in this great country.  From the beautiful lakes of Bhopal to the stunning tea fields of Assam, India’s magnificent natural heritage is something people the world over should have the opportunity to experience.

I take after one of my illustrious predecessors in Delhi, the great Chester Bowles, who in his 1969 memoir wrote extensively on Indian tourism.  “Foreign tourists,” he said, “must see the promise of India’s future as well as India’s ancient glories and its vast natural beauties.”  Ambassador Bowles’ words still ring true more than four decades later, and I think he would be pleased with the progress we are making today.

The numbers speak for themselves.  In 2015, the United States was India’s largest source of foreign tourists.  Over 1.2 million American visitors came to India, accounting for 15% of total foreign travelers.  The e-Tourist visa program has also been an immense success; in fact, visitors from the United States are among the top users of the e-Tourist program.

Tourism is equally critical to India’s economy and Prime Minister Modi’s goal of creating jobs for the nearly one million Indians who enter the workforce every month.  According to the World Travel and Tourism Council (WTTC), the travel and tourism sector contributed $120 billion or 6.3% to India’s GDP, which supported approximately 37 million jobs.

If the right investments are made, tourism has the potential to support 46 million jobs in India by 2025.

This is why travel and tourism featured so prominently during Prime Minister Modi’s visit to Washington earlier this month.  The U.S. and India agreed to become Travel and Tourism Partner Countries for 2017.  This partnership will further support U.S.-India trade in travel and tourism services and people-to-people exchanges.  U.S. Secretary of Commerce Penny Pritzker will be here for the Strategic and Commercial Dialogue in August and help take this initiative forward.  Her extensive experience in the hospitality sector will provide invaluable input as we develop a new framework for our cooperation on travel and tourism.

Ahead of the Prime Minister’s visit, we also signed a Memorandum of Understanding to facilitate India’s participation in the Global Entry program, marking a significant milestone for tourism and aviation security.  Global Entry will expedite travel for pre-approved, low-risk air travelers to the U.S. once they have applied and been approved for the Global Entry program.  We are currently working on the technical arrangements to bring this program online for Indian travelers.

Our governments, however, can and should do more.  Thanks in part to the successful “Incredible India” promotion campaign, India’s tourism industry is growing, but it has the potential to grow even faster if the right investments and policies continue to be implemented.

One of the areas that will help increase this potential is timely and efficient air connectivity, which is vital to any strong tourism relationship.  It’s good to see Air India and United Airlines represented here today.  United recently celebrated its 10th year of service to India and to date it has carried over three million passengers on nearly 13,000 flights between the U.S. and India.

The U.S. is very encouraged by improving air connectivity, and we hope the recently announced National Civil Aviation Policy will make air travel in India even more affordable and accessible.  We look forward to increasing passenger traffic between our countries as India takes steps to facilitate greater regional connectivity and implement growth enabling measures.  The announcement last week of 100 percent FDI in the civil aviation sector was a step in the right direction.  I’ve seen first-hand the economic impact that regional connectivity brings to communities throughout India and its great potential to create opportunities for both business and skill development.  We also welcome India’s commitment to sustainable aviation through its pledge to limit CO2 emissions in coordination with the International Civil Aviation Organization.

Another key area is infrastructure development.  This includes road connectivity, public transit, restaurants, hotel space, as well as a focus on sanitation and safety.  Equally important is human capacity and good customer service.  From the flight attendant, to the tour guide, to the hotel clerk, people want their travel experiences to be safe, comfortable, and hassle free.  Guarantee these elements and tourists will flock in droves.

The U.S. is also working hard to make travel to our country as enjoyable and easy as possible.  A critical function in tourism, of course, is the issuance of visas.  In 2015, for the first time in history, the U.S. Mission in India processed more than 1 million non-immigrant visa applications in a single year.  We are proud of this milestone, and of the message that it sends:  the United States is open for business and tourism and is committed to an efficient, fair, and transparent visa process.  Consular staff in Mumbai, Chennai, Hyderabad, Kolkata, and New Delhi have risen to the challenge of a growing workload to deliver world-class service to Indian visa customers.   Having adequate numbers of consular staff is one of the issues I regularly discuss with the Indian government.  We need to grow our staff and are proud of the investments we have made with our impressive new consulate in Mumbai and our planned new consulate compound in Hyderabad.  We encourage travelers to plan ahead and apply early to account for delays during busy seasonal times.   To better assist both Americans and Indians, the U.S. and India also announced plans during Prime Minister Modi’s visit to establish a new Indian consulate in Seattle.

Destination marketing and promotion is critical in helping visitors decide on where to visit and what to do there.  Brand USA, a public private partnership that is promoting international travel to the U.S., has greatly helped raise awareness about the benefits of tourism in the United States.  I am pleased that Sheema Vohra, Director of Brand USA for India, will speak in a later session about the creative and impactful work that her team is doing throughout India.

Part of this is effort is promoting Meetings, Incentives, Conferences, and Exhibitions, or MICE, travel to the United States.  Increasingly we are seeing Indian business professionals visit the United States for retreats and conferences, and they are thoroughly enjoying their experiences.  We encourage companies to reach out to our Commercial and Consular teams as you plan your next corporate event.

Whether it’s corporate or leisure travel, one of the great attractions of the United States, like India, is that there are so many amazing places to experience.  One can fly into Phoenix, Arizona, rent a car and visit picturesque Sedona on the way to see the majestic Grand Canyon.  From there, it’s less than a five hour drive to the spectacle of Las Vegas, before crossing the Mohave Desert to visit Los Angeles, California and Hollywood. This is just one sample itinerary among thousands in America.  Increasing numbers of Indian travelers are visiting each of our 50 great states, and they are experiencing the wonders of our national and state parks, visiting fascinating cities and taking their families to our many family-friendly destinations.   You can even visit my hometown, Johnstown Pennsylvania!

This year actually marks the centennial of the United States National Park Service, which Embassy New Delhi will be commemorating during our Independence Day celebrations this Friday.  Just last week, President Obama and the first family made their first visit to Yosemite National Park in California.  So if you’ve never visited a U.S. national park, this is the year to do it!

In closing, I want to emphasize the most important aspect of travel and tourism is not so much the number of dollars or rupees spent, but the person-to-person relationships that are cultivated, and the lasting memories that are created.  In his recent address to Congress, Prime Minister Modi recounted fondly his travels across the United States, covering over 25 states.  It led him to realize, in his words, that “the real strength of the United States was in the dreams of its people and the boldness of their ambitions.”  I think the same can be said of India and its people.  The ties between our people and countries have come a long way, but there remains much more to explore.  Let us continue the journey.  Thank you.