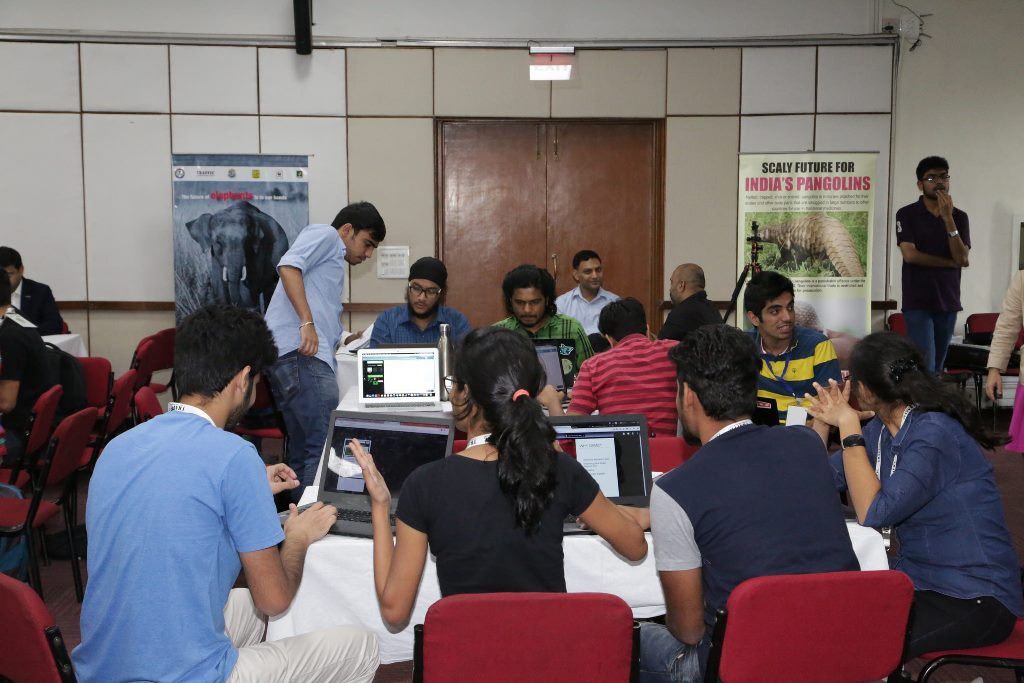 India’s first Zoohackathon successfully ended yesterday coinciding with the culmination of the Wildlife Week celebrations 2017. Zoohackathon was organised for the first time in India by the U.S. Embassy, TRAFFIC India and WWF-India at the WWF-India Secretariat on 7-8 October 2017 and brought together young developers, designers, project managers, and subject matter experts to create applications, systems, and tools to help reduce demand for illegal wildlife products.

‘Geeksforgreen’ developed an idea for a quantification tool(web application) that scales the total activity on social media platforms being used to facilitate the online buying and selling of Tarantula Spiders and scorpions. The application will also provide information to citizens about the existing legal framework surrounding such wildlife trade. Once developed, the application will be one of its kind that will monitor trafficking in arachnids on online platforms.

The runners up team, ‘Zoodesign’, developed an idea of Eagle Eye-a tool to filter and analyse infra red motion images taken through camera traps set up in forest areas to set an alert whenever there is any human intervention (poachers) in the protected areas of the forests. The tool has been designed in a manner that it will only set an alert when there is movement of humans and allows for differentiation between human and animal movement. The alerts will go to the concerned enforcement officials as well to a centralized server on a web application.

Illicit wildlife tradee is an ever evolving global crime that is increasingly getting more sophisticated and organised. Considered to be a high profit and low risk crime, it is attracting organized criminals which in turn pose a threat to national and global security, besides endangering the future of our wildlife.

In light of this, Zoohackathon was conceptualised and organised to challenge the public to develop solutions that will help stop wildlife trafficking. The contesting teams were given various problem statements related to ending wildlife trafficking and were asked to choose one. The problem statements included- Automatic audio & SMS alerting for park rangers; Image recognition technology that can screen for humans; Your idea! Create a wildlife trafficking technology solution; Quantify the legal and illegal trade of Tarantula Spiders and scorpions through social media platforms; Develop game that highlights the importance of biodiversity to the sustainability of ecosystems; and Help consumers make informed decisions about purchasing exotic menu items or pets.

Members of TRAFFIC India and WWF-India gave a background to poaching and illegal wildlife trade especially in relation to the problem statement. They also guided and mentored participants about illegal wildlife trade and how wildlife smugglers are using new technology and techniques to find customers in the virtual markets during the two day event in New Delhi. A spot quiz was held to generate interest and increase knowledge about India’s wildlife.

Mr Ravi Singh, Secretary General & CEO said, “I would like to congratulate the US Embassy for leading on this initiative that will help innovate and develop new solutions to fighting wildlife crime. Poaching and illegal wildlife trade is a serious issue and wildlife criminals are using new and sophisticated means to source these wildlife products and sell them to the consumers. With little awareness among the consumers about illegal wildlife trade, the trade in prohibited wildlife articles goes on. The solutions developed today will go a long way in helping to curb wildlife crime in India”.

Dr Saket Badola, Head of TRAFFIC India said, “ Zoohackathon is an interesting competition and first of its kind in India as it brings together intelligent minds to develop new technology based ideas for curbing wildlife trafficking, a much needed approach. Smugglers and wildlife dealers are using the virtual space to buy and sell illegal wildlife products and derivatives. They have been eluding the enforcement agencies with their ever changing modus operandi. TRAFFIC India is confident that these ideas will be adapted and further developed into solutions that will help end wildlife trafficking in India and abroad”.

Mr. Robert Garverick, Minister Counselor, Economic, Environment, Science and Technology, U.S. Embassy, said “At the Zoohackathon we are embracing the idea of “civic hacking.” We are doing this by soliciting your help in finding creative solutions to tackle the complex problem of how to combat illegal wildlife trafficking.”