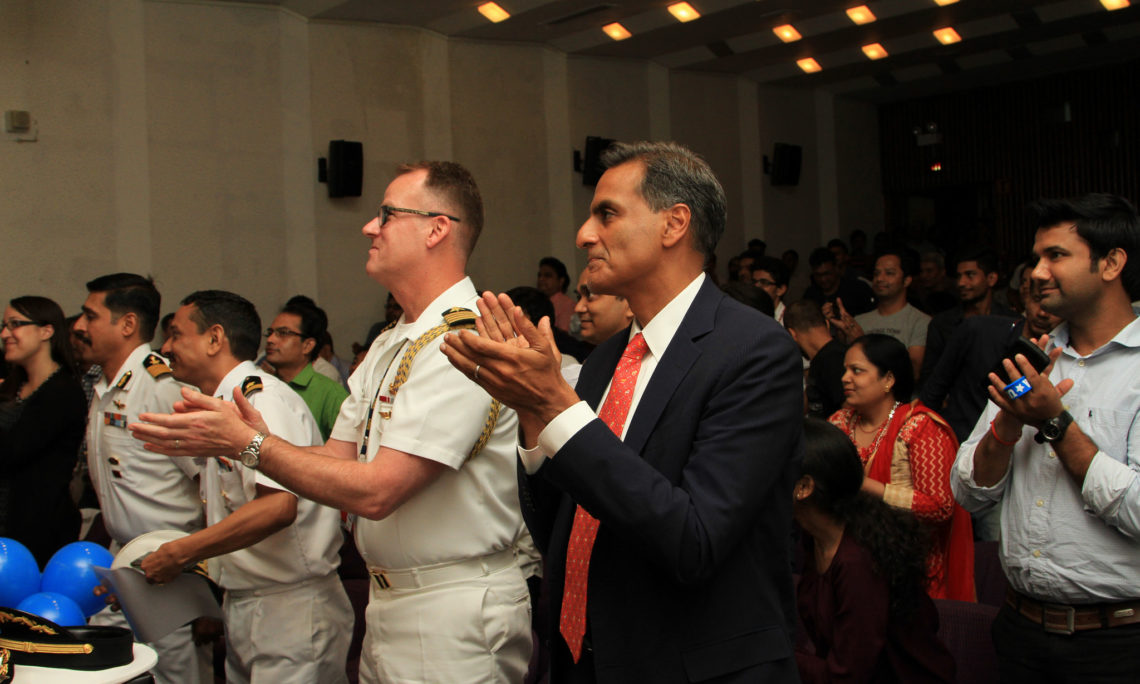 Distinguished guests and honored friends. On behalf of President Obama and the American people, it is a sincere pleasure to welcome you all here to celebrate America’s independence and our country’s wonderful natural heritage. I’d like to extend a special welcome to Minister of State for Home Affairs Kiren Rijiju, who has been a tireless champion of closer security cooperation between our two countries. Let’s also have a round of applause for the U.S. Embassy Marine Guard detachment, service-members from Mission India, and the other missions represented here, and of course the Flagship Brass Quintet from the U.S. 7th Fleet! Thank you for your selfless service. And I’d be remiss if I did not acknowledge the generous donors who made tonight’s celebration possible. Without their support, this would be a very bland – and – sober affair!

240 years ago, in a small hall in Philadelphia, 56 Americans gathered to articulate a set of principles for self-government. Timeless and self-evident, yet novel and revolutionary, these principles declared liberty is the birthright of every individual, that all of us are created equal by our Creator, and that governments must rule by the consent of their citizens. Those 56 individuals vowed to defend these principles with “their lives, their fortunes and their sacred honor.” From Valley Forge to Yorktown, they inspired American patriots with the grit and determination to throw off the chains of the world’s most powerful empire, and to establish in the new world, a united Republic to uphold the torch of freedom. Such was the resonance of those immortal words enshrined in the Declaration of the Independence, that for 240 years they have been the standard by which we Americans measure ourselves in our quest to form a more perfect union. And they have provided us with the resiliency to overcome times of discord and times of conflict.

The ideals embodied in the Declaration resonated around the world – across languages, across cultures, across time. In the words of Abraham Lincoln, the Declaration of Independence is the immortal emblem of all humanity. In 1930, when the people of the Indian sub-continent declared themselves independent, the echoes of Thomas Jefferson were heard in the Purna Swaraj, India’s declaration of self-rule, which begins with: We believe that it is the inalienable right of the Indian people, as of any other people, to have freedom and to enjoy the fruits of their toil and have the necessities of life.

Tonight we celebrate not just the ideals America was founded upon, but also America itself: its spacious skies, its amber waves of grain, its purple mountain majesties. The vast and timeless beauty of the American landscape has shaped the character of the American people, endowing them with optimism, self-reliance, and a spirit of discovery. In his recent address to Congress, Prime Minister Modi recounted fondly his travels across the United States, stating it led him to realize that the “real strength of the United States was in the dreams of its people and the boldness of their ambitions.” It is that spirit of freedom which underpins the bonds between our two nation’s citizens.

This year marks the centennial of the organization charged with protecting our natural heritage: the United States National Park Service. Whether its national parks like Yosemite and Yellowstone or battlefields like Gettysburg and Antietam, for 100 years this extraordinary agency has worked tirelessly to protect America’s natural treasures and preserve our history. The United States is truly blessed to have so many talented park rangers and public servants dedicated to preserving this rich natural heritage for future generations. President Teddy Roosevelt, whose leadership was instrumental in founding the National Park Service, said it best: “We have fallen heirs to the most glorious heritage a people ever received, and each one must do his part if we wish to show that the nation is worthy of its good fortune.”

From the snow-capped peaks of the Himalayas to the jungles of Ranthambore, India too has a stunningly beautiful landscape which our two nations are working together to preserve. “Protection of environment and caring for the planet”, said Prime Minister Modi in his address to Congress “is central to our shared vision of a just world.”

Henry David Thoreau, the American philosopher and naturalist who influenced Gandhi ji, recognized our shared natural heritage over 150 years ago. One winter morning in 1846, Thoreau looked out the window of his small cabin on Walden Pond in Massachusetts and found workmen sawing huge blocks of ices. The ice was to be transported to Boston harbor, and then sent onward to Kolkata, over 16,000 miles away. Witnessing this scene, Thoreau imagined the ice would eventually melt and join the Indian landscape. In his eloquent words “The pure Walden water is mingled with the sacred waters of the Ganges.”

Ladies and gentlemen, let us tonight celebrate the natural landscapes we seek to preserve for our posterity and pledge ourselves anew to those ideals immortalized 240 years ago—the right to life, liberty and the pursuit of happiness. Thank you all.