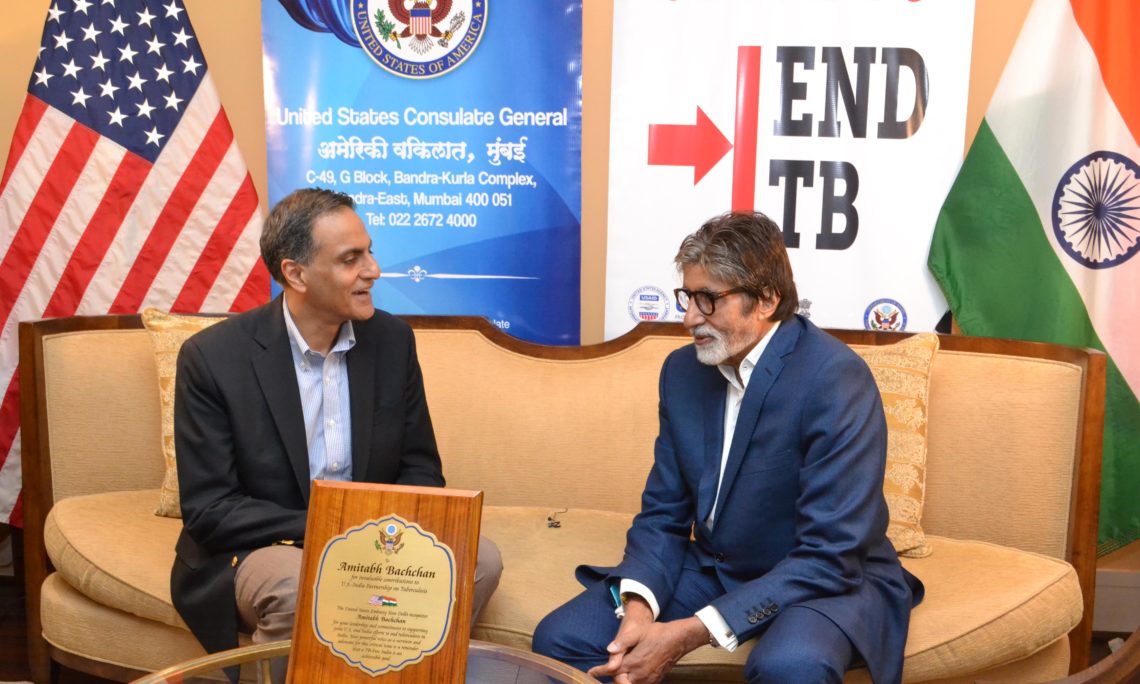 Mumbai, January 8:  U.S. Ambassador to India Richard R. Verma and legendary Indian actor Mr. Amitabh Bachchan came together for a Live Video Chat on Facebook, dedicating their Sunday evening to talk about the important issue of tuberculosis (TB) with their fans and followers.  Going live from Mumbai, the two talked about the U.S. Embassy’s collaboration with Mr. Bachchan for ending TB in India and U.S.-India partnership among others.

Speaking live to viewers, Ambassador Verma thanked Mr. Bachchan “for his dedication to support the cause and for sharing his story as a TB survivor to reduce the stigma associated with TB.”

“Together we can save more lives and remove the burden this disease places on families, communities, corporations, and India,” said Ambassador Verma referencing the high rates of TB-related deaths in India.

Before the live chat, the U.S. Ambassador also presented an award to Mr. Bachchan on behalf of the U.S. Embassy in recognition of his efforts and support to the U.S.-India partnership for the TB-free India campaign.

Thanking Ambassador Verma for the recognition, Mr. Bachchan said, “Last year, Ambassador Verma initiated this campaign around the fight to end TB in India, and it was a privilege to know him personally and to work with him and his team closely. I am presently an ambassador for TB eradication in India for the campaign ‘TB Harega Desh Jitega’ and am a TB survivor. It is inspiring that India and the U.S. are natural partners with a long history of collaboration on TB prevention, treatment, research, and cure, and I hope to continue to do my bit in this partnership to end TB in India.”

Ambassador Verma and Amitabh Bachchan first came together to work on TB during the “Mumbai Dialogue: Towards a TB-free India” event organized in Mumbai on September 10, 2015.  The professional engagement soon developed into a personal relationship with the two exchanging letters, updates, and sharing a stage around the common cause of TB.  On March 7 last year, Mr. Bachchan flew to Delhi to attend a reception hosted by Ambassador Verma at his residence, the Roosevelt House, to commemorate World TB Day.  Mr. Bachchan attended the reception as “TB Brand Ambassador” and a TB survivor.