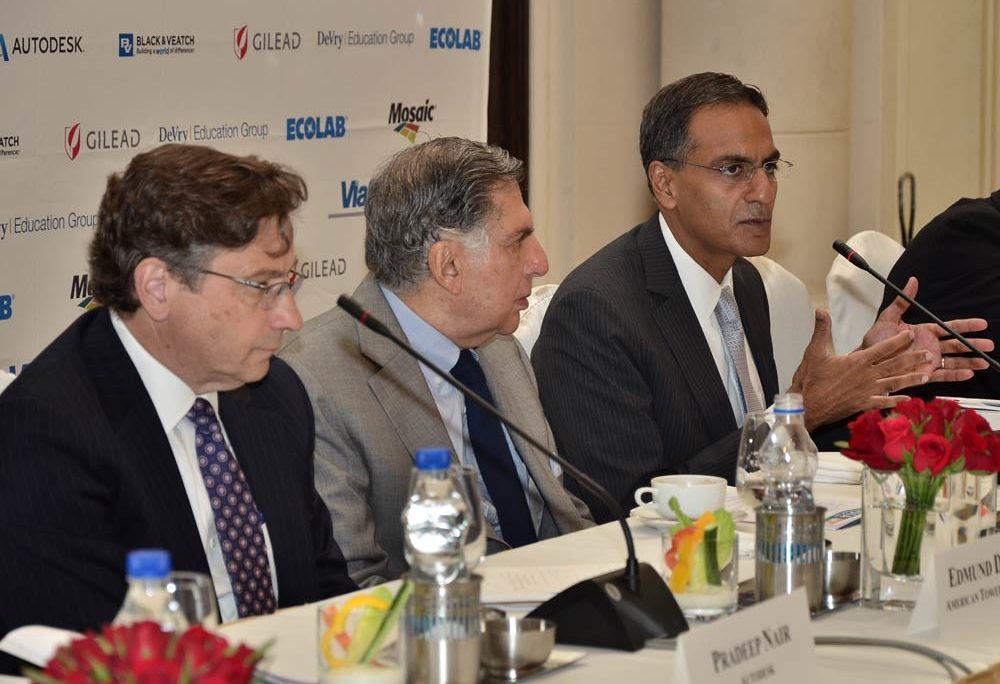 Thank you Ron Summers for that kind introduction.  Ron has been a steadfast champion of the U.S.-India relationship for many years and it’s an honor to have him lead today’s discussion.  I would also like to recognize Peter Tichansky for his leadership at the Business Council of International Understanding and his central role in bringing us all here today.  Since its launch more than six decades ago, BCIU has worked to advance President Eisenhower’s vision of building international understanding through commercial diplomacy.

I would also like to thank Minister Goyal, Minister Pratap Rudy, and officials from Madhya Pradesh for joining us.  Your engagement is critical to fulfilling BCIU’s mission of creating closer bonds between our business and government leaders.

I think President Eisenhower, who was the first U.S. President to visit India in 1959, would be pleased with today’s event and the positive trajectory of the U.S.-India partnership.  And 60 years later, our government continues to promote these bonds between our countries through economic diplomacy.  Secretary Kerry has long subscribed to the mantra that “foreign policy is economic policy.”  That’s especially true of the U.S.-India partnership.   Our businesses and investors have long been at the forefront of deepening ties between our countries.  We’re all well aware of the extraordinary potential of the Indian economy.  With the potential to have the world’s largest middle class and with its large number of college graduates and skilled workers, the opportunities for the Indian market and for young people in this country are immense.   It’s no surprise American companies are leading the way when it comes to trade and investment – the  U.S. is India’s largest trading partner, with bilateral trade reaching a record $107 billion in 2015.

For India’s part, entrepreneurship and innovation are central to Prime Minister Modi’s vision for transforming India.  When the Prime Minister visited Silicon Valley last fall, I heard him speak about the need to bring together the best minds in India and the United States to solve our two countries’ – and the world’s – biggest challenges.  He encouraged all of us to look at ways to harness our great networks of entrepreneurs and innovators to improve the lives of ordinary people.

No one doubts the innovative and entrepreneurial spirit of the Indian people – some 15 percent of start-ups in Silicon Valley have been founded by Indians and Indian Americans, and they make up a mere one percent of the U.S. population.  But that’s just the tip of the iceberg.  The median age in India is 25. There’s incredible creativity and entrepreneurial spirit in this young population waiting to be unleashed.  If these young people can gain the right vocational and technical skills, they can fuel India’s economic growth well into the 21st century.

The Indian government under Prime Minister Modi’s leadership has taken important steps to improve investor confidence and ease of doing business.  From 2014 to 2015, India climbed some 12 places in the World Bank ranking.   But more remains to be done to generate the innovation and entrepreneurs that can drive India’s economy forward.  India needs to create jobs for tens of millions of people entering the workforce in the coming decade.  While India may not create that many entrepreneurs, Indian entrepreneurs can help to generate millions of new jobs.

The United States and India are working collaboratively to expand entrepreneurship, particularly among young people and women.  I recently had the honor of presenting 33 awards to Indian innovators as part of the U.S. –India Millennium Alliance.  In partnership with USAID, the Millennium Alliance is a public private partnership that leverages Indian creativity and expertise to scale locally developed innovations to benefit populations across India and the world.  This is now a multi-million dollar partnership that is supporting over 60 innovators to help end extreme poverty through seed funding and capacity building services.

In both our countries, women are still grossly underrepresented in the “tech world”.  We need to improve quality and access to education, create mentorship opportunities, and challenge cultural stereotypes that limit opportunities to engage our girls and women in the tech and entrepreneurship space.  For entrepreneurs to innovate, they also need the financing, the ability to scale projects successfully, and they require an ecosystem that doesn’t punish failure, but instead helps those get back up on their feet and launch again into new innovations.  We recognize that there is much work to be done– for this reason we’ve used the Global Entrepreneurship Summit as a platform to launch initiatives to encourage entrepreneurship opportunities for young people and women while partnering with the private sector to expand our  impact.

The United States hosted the 7th Global Entrepreneurship Summit in California’s Silicon Valley this past June, including a day devoted to young entrepreneurs and women.  The Summit brought together 700 entrepreneurs and 300 investors from 170 countries.  $10 billion in venture capital is expected to be invested as a result of contacts made at the summit.  And we were very pleased that India has agreed to host the eighth summit in 2017.  This will be an important opportunity for India to showcase its entrepreneurs and attract leading international tech and venture capitalists.

GES 2017 will be an important opportunity for India to advance ease of doing business efforts, highlight skills and entrepreneur development, and encourage more private sector investment.  I know the Indian government is developing an ambitious vision for this one-of-a-kind event which demonstrates that India is open for business and that it is a global leader when it comes to innovation and entrepreneurship.  And I can assure you that our governments are working together to nurture this culture of innovation and ensure there is an ecosystem in place to support innovators, their ideas, and marketization.

We are, for example, enthusiastic supporters of Prime Minister Modi’s Skill India and Startup India initiatives.  The U.S. and India plan to launch the private sector-led Innovation Forum on the margins of the Strategic and Commercial Dialogue at the end of this month.  The Innovation Forum aims to establish a platform for U.S. and Indian entrepreneurs to discuss best practices in promoting a culture of innovation and highlight the leading role that innovation partnerships can play in the U.S.-India economic relationship.

We’re also hoping to convene the next meeting of the U.S.-India CEO Forum at the S&CD and advance our subnational agenda, including more engagement between American governors and Indian chief ministers.  Travel and tourism will also be one of Commerce Secretary Pritzer’s priorities for India. The Commercial track of the S&CD will continue to advance our collaboration to improve Ease of Doing Business issues, Smart Cities and Infrastructure, and Standards to create a more investor and business friendly environment.

I’ve been fortunate in my job to travel all across India – 20 states and counting – and I’ve seen firsthand the immense promise, potential, and talent of Indian youth and entrepreneurs.  Business professionals, start-ups, students, government, and community leaders are all driving change in India, and constructing solutions for today and future generations.  And what’s been particularly exciting is seeing how innovators and youth from our two countries are working together on everything from clean energy solutions to the next Silicon Valley-Bangalore startup.  By creating additional opportunities for Indian youth and entrepreneurs to come together and learn new skills – though universities, community colleges, and corporate vocational initiatives – we can strengthen not only the economic partnership between the U.S. and India, but also the people-to-people ties at the heart of this partnership.

This great event hosted by BCIU is in that spirit.   I have no doubt these partnerships will create unprecedented opportunities that will transform the lives of millions.  As President Eisenhower said in his address to the Indian Parliament, “the welfare of America is bound with the welfare of India.” That holds true today as much as it did six decades ago.  Thank you.