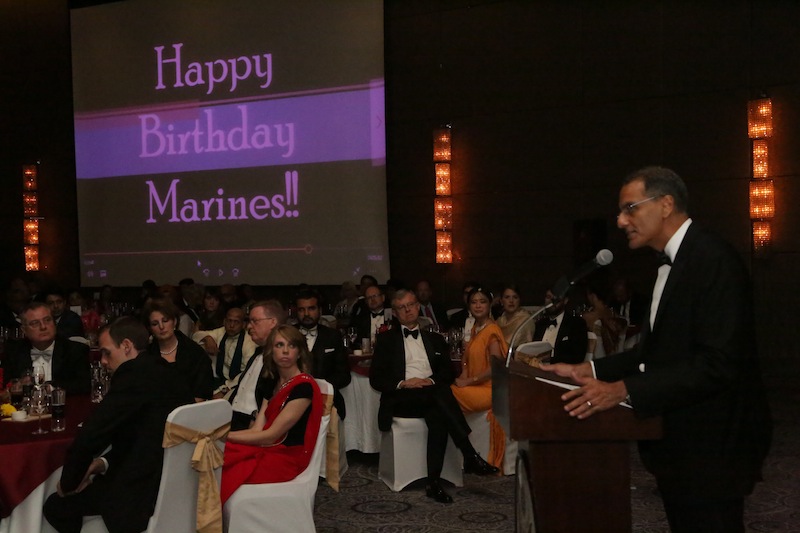 Ladies and gentleman, on behalf of Embassy New Delhi, I’d like to welcome everyone to this year’s Marine Corps Ball.  It’s an immense honor to be here this evening to celebrate the 241st anniversary of the United States Marine Corps.  There’s a common saying that the life of a Marine is to defend the American way of life.  The Marines here this evening exemplify this moto.  To Staff Sergeant Valentin and the Marines of the New Delhi MSG Detachment, thank you for your service and for upholding the values and traditions of your great institution.  Let me also thank our guest speaker, Lieutenant Colonel David Ray, as well as Chief Warrant Officer Jesus Espinoza, and all the outstanding personnel in the regional security shop, the Defense Attaché Office, and the Office of Defense Cooperation.  In and out of uniform, hundreds of people at this mission work day in and day out to keep this mission safe and to deepen the partnership between the United States and India.  I know I speak on behalf of everyone in the Mission when I say, thank you for your service.  I also want to acknowledge our Indian guests and military colleagues from ally and partner embassies.   The United States deeply appreciates the partnership and sacrifices of its allies and I am confident these bonds will continue to deepen.

As you all know, on January 20th the United States will undergo a peaceful transition of power, a hallowed tradition that goes back to General Washington.  The strength of our democratic institutions and the power of our example are what make our nation great.  And the Marines are a vital part of that great American story.  When I asked my son this year what he wanted to be for Halloween, I expected he would pick a popular cartoon character or action hero.  But he said he wanted to be a Marine because they are the real heroes.  I think we all share this view.  From the fields of Trenton and the shores of Tripoli, to the jungles of Ke Sahn and the deserts of Fallujah, the history of the Marine Corps is one of bravery under fire, of fortitude in times of hardship, of hope against the odds, and of modesty in victory.  In the annals of warfare, very few warriors can boast of the honor and glory that has come to define the Marines.

You are all familiar with that iconic photograph of Marines raising the American flag on Mount Suribachi during the Battle of Iwo Jima.  It captures so perfectly the Marine Corps ethos.   The young men in the photograph were ordinary citizens, forged into Marines, and sent to fight for the world’s freedom thousands of miles from home.  Admiral Nimitz’s famous words bear repeating: “Uncommon valor was a common virtue.”  Marines are men and women of valor who have decided to place their country, their values, and their fellow citizens higher than themselves.  Should the need arise, they are willing to make the ultimate sacrifice for what they believe in.  There is no higher calling, no cause more sacred.  We are forever in your debt.

As you know, the Marines share a special bond with the Department of State that goes back to the earliest days of our Republic.  The Marines were established in 1775, even before we declared our independence, and the State Department came into being in 1789 as the nation’s first executive department.   For more than two centuries, Marines and diplomats have been enduring partners in American foreign policy.   The first recorded instance of our collaboration was in 1799, when a detachment of Marines accompanied the American Consul General in Haiti on a diplomatic mission.  This proud partnership continues to this day, with Marines working alongside American diplomats at 148 embassies and consulates around the world.  And I’m sure Mission morale would take a hit without Marine house parties!

I want to underscore the value and significance of this bond.  Every time you pass Post One, remember how fortunate we are to have the Marines as our partners.  And to the Marines here, I hope you all appreciate your critical role in our broader mission.  We can all take pride in what we are seeking to accomplish here.  The President has asked us to advance our partnership with India, which I firmly believe is one of the defining partnerships of the 21st century.  By serving here, we are working to advance American interests and helping to ensure our nation’s future security and prosperity.   This is our common objective.

Each and every day since I assumed my duties as Ambassador here, I’ve been honored and humbled to work with such talented individuals at this Embassy.  First and foremost, this includes the Marines of the Delhi MSG, and I say this as a former Air Force officer!  They are Staff Sergeant Armando Valentin, Sergeant Jacob Hann, Sergeant Peter Anderson, Sergeant Gregory Lindsay, Sergeant Samuel C. Davis, Sergeant Juan Ortizsoler, Sergeant Ivan Martinez, and our youngest marine, Lance Corporal Zachary Mcintyre.  Marines, tonight we celebrate your beloved Corps and give our thanks for your service to the Embassy and to our great nation.  Happy birthday and Semper Fi!