This project generated critical information about the economy and architecture of the 16th century highway region.  Additionally, the documentation revealed structures bearing testimony to a shared tradition of Hindu and Muslim communities living in this dynamically layered landscape for over five centuries until the partition of India in 1947. (next five photos) 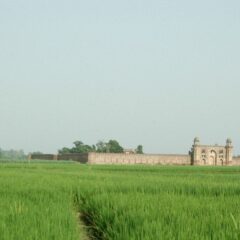 This rest-house known as Dakhani Sarai at Mahlian Kalan, Jalandhar, Punjab is one of the best-preserved Mughal rest houses along the highway from Agra to Lahore. 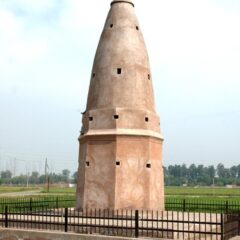 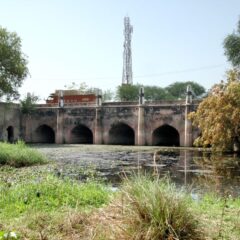 This Mughal Bridge at Sirhind, Jalandhar, Punjab was constructed between 1628-1658 CE on the then River Hansla on the Agra – Lahore Road. 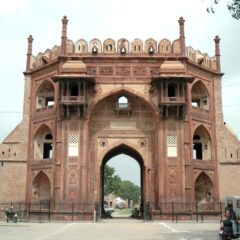 This rest house (Sarai) was patronised by Empress Nur Jahan, the wife of the fourth Mughal Emperor Jahangir (1605-1627) in 1620 CE. Even today called “Nur Mahal” (Nur’s Palace) this rest house located in Jalandhar district of Punjab stands out for its remarkable depiction of Hindu and Islamic motifs within an Islamic architecture. 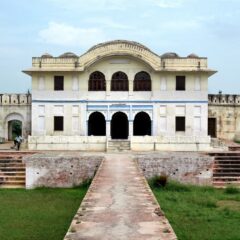 The Sheesh Mahal (Glass Palace) is a structure built in the Aam Khas garden complex in 1634-35 CE at Sirhind, now located in Jalandhar district of Punjab. This garden was developed as a highway-inn by the fifth Mughal Emperor Shah Jahan (1628-1658), known as the builder of the Taj Mahal, for the use of royalty (Khas) as well as common people (Aam).

This project has led to the revival of the endangered music traditions of the Langa and Manganair communities of western Rajasthan, as it trained the younger generation of musicians to document their own heritage using audio-visual recordings, opened new economic avenues for the marginalised communities and inculcated pride in their own heritage. (next two photos) 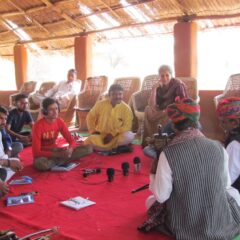 Documentation of endangered music traditions of the Langa and Manganiar communities of western Rajasthan. 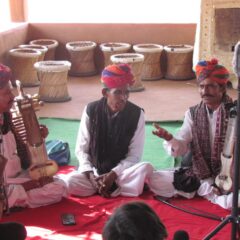 Recording of the narrative and singing ballads of the Langa community at an U.S. State Department supported training workshop at the Arna Jharna Desert Museum in Jodhpur, Rajasthan, 2020.

Conservation of the 16th century Arab Serai complex gateway, within the larger UNESCO World Heritage site of the Humayun’s Tomb

All three AFCP projects at the Humayun’s Tomb world heritage site have been instrumental in reviving traditional crafts by employing master craftsmen working with traditional building materials such as sandstone, lime mortar and glazed tiles and generating employment over several years.  The footfall at these national monuments is a testimony to India’s spirit of inclusion and diversity. (next two photos) 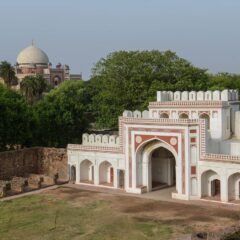 The restored Arab Sarai Gateway shows the red-white contrast on the façade, after removal of plain cement plaster repairs undertaken in the twentieth century. 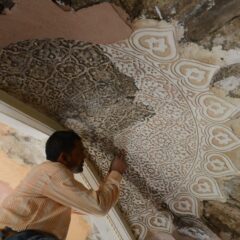 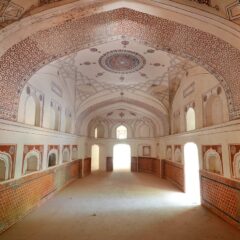 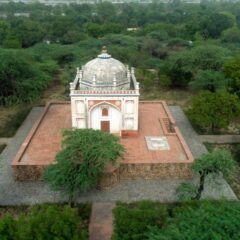 Collapsed portions of the enclosure walls of the Unknown tomb were reconstructed to secure the monument.

Conservation of the 16th century monument within the larger UNESCO World heritage site of the Humayun’s Tomb, New Delhi (next photo) 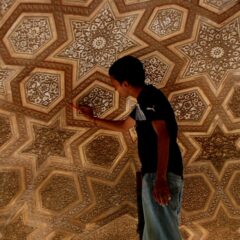 Conservation in progress: Sunder Burj conservation revealed the splendour of a unique ornamental ceiling that was carefully restored by master craftsmen.

The AFCP supported documentation of the Balaji Ghat by INTACH (Indian National Trust for Art and Cultural Heritage) paved the way for its conservation by INTACH and the American Express, creating awareness about India’s unique cultural legacy. The project is an inclusive endeavour to generate employment and sources of revenue while preserving age-old traditions and harmonious ways of living of the Hindu and Muslim communities around this historic precinct. (next two photos) 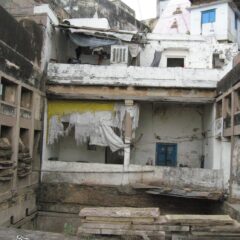 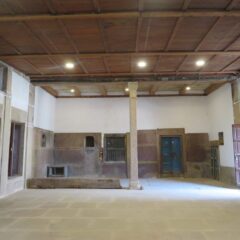 After conservation supported by the American Express.