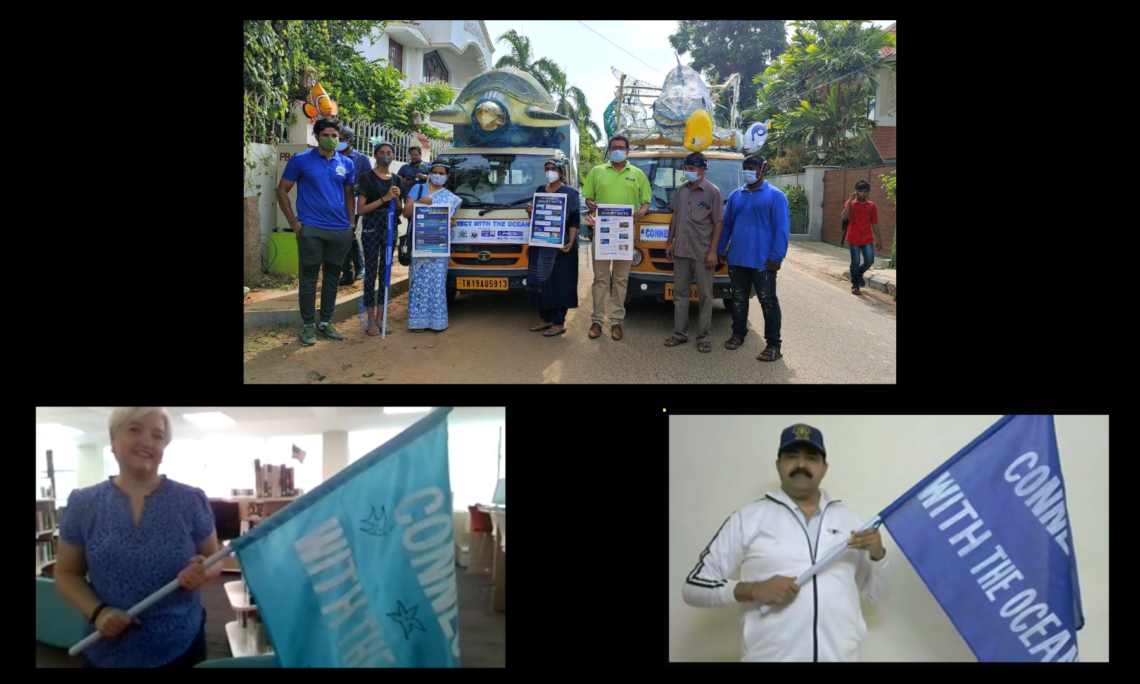 In a virtual ceremony with senior Indian Coast Guard Officials, Acting U.S. Consul General in Chennai Kathryn Flachsbart flagged off the “turtle float,” which departed from the Tree Foundation office in Neelangarai, Chennai on Saturday, September 18, 2021.

Chennai, Sept 18:  U.S. Consulate General Chennai commemorated World Cleanup Day on September 18 by organizing a mobile “turtle float” in partnership with the Tree Foundation and United Way Chennai. In a live-streamed event, Acting U.S. Consul General in Chennai Kathryn Flachsbart and Indian Coast Guard officials flagged off the float at the Tree Foundation, a conservation organization working to protect sea turtles along the east coast of India. On World Cleanup Day, the float made stops for public view along Chennai’s East Coast Road (ECR) from Neelangarai to Mahabalipuram.

The “turtle float” is a mobile visual exhibit of ocean biodiversity with the central theme “Connect with the Ocean.” The float display includes models of aquatic species, dioramas of the ocean floor, and illustrated banners about the wonders and threats of the oceans. The exhibit includes a display of recreated models made from ghost nets to drive home the message about the volume of plastic that collects in the ocean and the dangers they pose to ocean life. The World Cleanup Day campaign focuses on saving threatened marine species, including sea turtles, by reducing ocean plastics. The float will visit thirty fishing villages along Chennai’s east coast, two public beaches, a tourist spot, and a fishing harbor, where it will be in full view of the public before the campaign ends in November 2021.

After virtually inaugurating the “turtle float,” Acting Consul General Kathryn Flachsbart highlighted that ocean health is a shared global climate challenge: “For more than 100 million years, sea turtles have been protecting the oceans by maintaining productive coral reef ecosystems and transporting essential nutrients from the oceans to the beaches and coastal dunes. Protecting and increasing the sea turtle population will contribute to our oceans’ health for years to come. I would like to thank our grantee United Way Chennai and the Tree Foundation for collaborating with us on this project. We are grateful to the Indian Coast Guard for their support and participation.”

Dr. Supraja Dharini, Chairperson, Tree Foundation, said: “The Tree Foundation’s Sea Turtle Protection Force members organize annual coastal cleanups and community welfare programs throughout the project areas. We hope that the instances of ghost nets, carelessly discarded nets, and plastic in the ocean will greatly reduce over time. Attitudinal change will become a part of the daily routine of the communities we work with.”

The float will also stop at select educational institutions along the route to sensitize youth on issues surrounding ocean health and highlight the U.S.-India partnership against climate change. To quote U.S. Special Envoy for Climate John Kerry, “this is a decisive decade to dramatically scale up ocean and climate action — which are two sides of the same coin.”